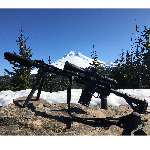 Sign in now!
Category:
Firearms (Full30)
Description:
Sig MCX Rattler 300 blackout short barreled rifle. Edit: In this video I’m wearing a normal billed baseball cap and am getting gas in my eyes. I visit this problem in a future video with a short billed knit hat, that hat backwards and a Nomad, Nomad L and Hyperion

Must have an approved ATF Form 4, your engraving done and your tax stamp in hand, then get the minimalist plus folding stock

I like the Dead Air Nomad the best for subsonic ammo. Maybe if I wasn’t wearing a hat, the blowback to the face wouldn’t be so bad with the supersonic ammo. I thought the Geissele charging handle would take care of it, but I guess not.

The OSS HX QD 7.62 does a fantastic job with supersonic rounds as long as you have ear plugs in. It does a lot with subsonic ammo, just not nearly as much as a baffle style can.

The Dead Air Wolfman did sound good with both subsonic and supersonic ammo. I think I still has the gas all the way up from when I was using the OSS can before it. The Wolfman probably wouldn’t have been annoying with subsonics if I am correct with that. The bore is wider than the Nomad, but it is longer. Less back pressure and more back pressure. I didn’t try it in it’s short configuration and probably should have to have been fair. Less back pressure and shorter than the Nomad like that.

Edit: I just shot 6 supersonic rounds with the Nomad the day after posting this video. I did this without wearing a hat and the gas was not directed into my eyes! The Geissele Super MCX charging handle doesn’t completely stop the gas, but redirects some upwards to where a baseball cap would capture it and redirect it into ones face. Everything I said in the video is true for a person wearing a hat. Without a hat, there is still light gas you feel in the face, but it isn’t eye watering like with a hat.

Also you should use Key Mo or Key Micro with the Nomad and Wolfman for any sustained supersonic fire to prevent baffle erosion.

With most semi automatic guns that have a baffle style silencer and when used in conjunction with subsonic ammo, I usually don’t need ear protection for these short videos. I would use them if I was shooting for a longer duration.

Kriss Defiance low profile polymer flip up sights. A hand me down pair from another rifle I’ll make a video of eventually.

Sellier &amp; Bellot 200 grain subsonic ammo. I get light strikes every so often.